The next meeting is Tuesday night May 10th, 2022, at 6:30 p.m at the museum of Innovation Explosion at 1806 University Drive.  We will also be on Zoom.  Arrive around 6p.m. for and social time. We must follow any restrictions by The museum of Innovation Explosion as required.  Please bring your mask and be prepared to social distance. Detailed information for the meeting will be sent via e-mail after the LongPath is published.

Ward Silver has been a ham since 1972 when he earned his Novice license (WNØGQP). His experiences in ham radio led him to a 20-year career as an electrical engineer, designing microprocessor-based products and medical devices. In 2000, he began a second career as a teacher and writer, leading to his receiving the Bill Orr Technical Writing Award in both 2003 and 2016. He was inducted into the CQ Contest Hall of Fame in 2015 and in 2008 was recognized as the Dayton Hamvention’s “Ham of the Year”.

Ward is Lead Editor of the two primary amateur radio technical references, both published by the American Radio Relay League — the ARRL Handbook and the ARRL Antenna Book. He is the author of all three ARRL licensing study guides and writes QST magazine articles, receiving the QST Cover Plaque for most popular article four times. He has written two other Wiley titles, as well; Two-Way Radios and Scanners, and Circuitbuilding Do-It-Yourself. His most recent ARRL book, Grounding & Bonding for Radio Amateurs, will soon release a second edition. He has also written the mildly amusing ham radio detective mystery, Ray Tracy: Zone of Iniquity.

On the air, he enjoys DXing, contesting, building antennas, and participating on his local emergency communications team. He is a founder of the World Radiosport Team Championships and President of the YASME Foundation’s Board of Directors. Outside of ham radio, Ward plays the mandolin, dabbles in digital photography, and enjoys biking, camping, and canoeing or kayaking (not at the same time).

This year’s banquet will be Saturday, August 20th, 2022  at the Elks Lodge at 725 Franklin Street SE Huntsville, AL 35801 More details are on our Banquet page.

We have several door prizes that will be given away at the banquet!

Purchase your banquet ticket to be eligible. You must be present to win.

Grand Prize to be announced soon! 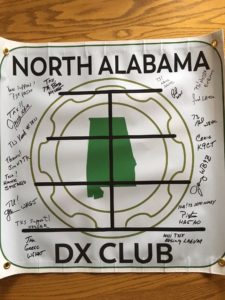 We have recently received our DX Club banner with the signatures of our friends on the recent and ill-fated Bouvet Island DXpedition.

Due to lower ARRL fees we have been able to cut the QSL filing fee in half! NADXC provides ARRL Outgoing QSL card bundling for our members who are also ARRL members. Bring your QSL cards to any meeting. The fee for adding to the Club’s outgoing bundle is $1.50 per ounce (8-10 cards depending on how heavy they are). You must also provide proof of your current ARRL membership to submit with the cards. Please alphabetize your cards and find Stephen KY4G to submit the cards and payment.

If you are a new member, and paying dues for the first time, please also submit a membership application.

Report any issues by sending a note to treasurer@nadxc.org